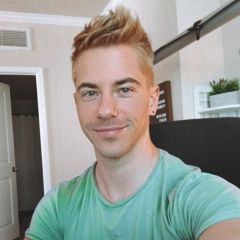 Around that time, Charles also met his now-husband of 18-years and hasn't looked back since. Until now.

Behind the code, product updates and newsletters are a group of people who share a passion for community building. Considering how volatile and toxic the Internet can be, we want to become more visible, transparent and vulnerable.  To help you familiarize yourself with the masterminds behind Invision Community, starting with Charles, we're kicking off a new series that'll highlight our team.

I interviewed Charles for the first installment. In it, he commented on the state of the Internet: "I do think some times, for or better or for worse, people forget there are real people on the other end," he said.

"People don't like change. No one likes change," Charles said, adding "sometimes you say, 'we really need to change something' either in the software, or how you do things, and people push back. It might be we change a feature or maybe internally we change the way we do something. Sometimes you have to move forward. Sometimes it's irritating at first. 'Why did you change that?!' And also you have to recognize that sometimes you're wrong. Sometimes you might change something [and think], 'no, it's not better...' I really find that that's a big thing – to constantly be looking at all those other options and try stuff out. It doesn't harm [anything] to try things."

And in the spirit of Pride Month, Charles opened up about being part of the LGBTQ community and also President of a successful company. He hopes it'll inspire others.

"I am lucky, and it's a privilege. [For one] that the world we're in now is different than the world was five years ago, 20 years ago... but also being an Internet company you have a unique position where people don't know your gender, your age, your race, anything about you online... Particularly 20 years ago when we started even less so... that's the thing that's always kind of been there. I think I'm lucky in that regard. I recognize some people don't have that unique approach to things that I've enjoyed. I would say on that whole it hasn't really been a big thing and I'm lucky that it hasn't."


The full interview is available to watch up top.

After watching, please drop us a line in the comments and let us know your thoughts! 🌈